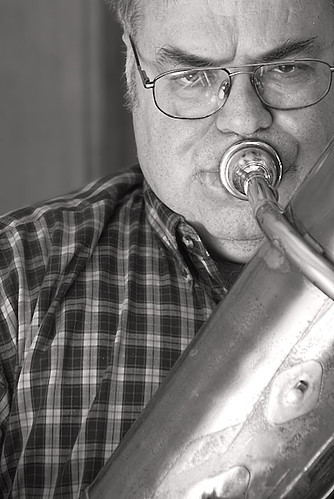 Doug Purvis was a fellow tuba player in Toronto, and was quite the bon vivant himself.  He played for over thirty years in the National Ballet of Canada Orchestra, and we performed together in the tuba section of the Hannaford Street Silver Band for around twenty years.  This recipe is the result of hanging out with Doug and his love of cooking.

In the mid 80s, I found myself subbing for “The Purv” on a run of The Nutcracker at the Ballet.  Once it was over, we gathered at our favourite Toronto restaurant, Gasthaus Schroeder, where he was going to write me a cheque for the shows that I had covered.  (Unfortunately, The Gasthaus is long gone now.  I really miss their dark draught and schnapps, and I wish I had gotten the recipes for several of their soups!)  I don’t recall the exact amount Doug owed me, but it was several hundred dollars.  I had had a good year financially, and didn’t really need the money, as it would have just gone to the taxman!  (And anyway, I had something more interesting in mind!)  I knew of Doug’s “hobby” from his earliest days of touring with the Ballet   While on the road, Doug would frequent nice wine stores and pick things up (mostly French reds) that he knew would be great after sitting for several years, so I made the following proposal; “Doug, you can keep the money, but I want to taste a couple of those really nice bottles of red that you’ve had lying around for over 10 years, and, I want you to build a fantastic meal around them.  He jumped at it, (after all, he would be partaking too!).  As a result, I had some of the greatest wines that I probably will ever have.  I’m sorry that I’ve forgotten the particulars, but there was a Chateau Margaux or Chateau Latour from the 60s and a really nice Pomerol as well.  Each of these wines would have easily gone for several hundred dollars or more in the liquor store, (assuming you could even find them, and just imagine what the mark-up would be if you found them in a restaurant!).  It was an amazing night!  I recall that we started the meal with a really nice half bottle of white wine that went beautifully with the following mind-blowingly good appetizer.

1.      Melt butter in a large frying pan and when hot, add scallops in one layer.  Sprinkle with salt; cook scallops one one side, then on the other, no more than a few minutes.  OVERCOOK THEM AT YOUR PERIL!  Sprinkle scallops with shallots, tarragon, lemon juice and brandy.  Continue cooking, add the hot cream and the mustard.  Bring to a boil, stirring with a whisk.  If dish needs further thickening, add beurre manie.  Stir until thickened to taste.  Serve hot.

Makes 6 servings (as an appetizer, of course). Extra points if you pour out a glass of the sauce and drink it!